1) Turning frowns upside down Little boys (& I!) aren’t feeling tiptop today. It’s been quite hard with non-stop whining, but we did some creating & had a good time! It changed the mood of our afternoon and stopped us all getting grotty with each other. Think we will do more arty stuff together as we don’t get chance to do it often, & I’d like to encourage them all to have a go being a little more creative! 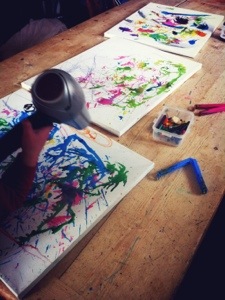 2)Daddy time Joby took Rocco out to a DIY store, & they had a good time! Rocco is what we affectionately call a “Daddy Magnet”! He’s not been feeling very great so he’s extra attached today, following him everywhere! They made a fire together & he ate his dinner on his lap! 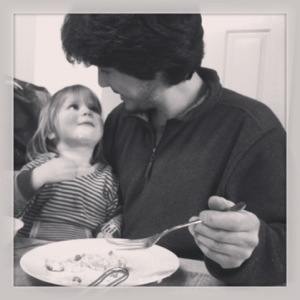 3) Rainbow – found another little top that was passed down in Sylvie’s clothes. Forgot I’d had this & it’s not going to fit her much longer either, but it was lovely bright & cheery!

4) Hidden Spinach Joby made a smoothie for lunch & I persuaded him to let me stick a handful of spinach leaves in. Nobody was keen on the idea… But there was not a drop left! Big success! In his smoothie was a concoction of banana, frozen strawberries, sultanas, horlicks, honey, spinach, natural yoghurt & milk. Sounds odd.. Tasted amazing!

5) Willpower – First time since the 3rd I had felt like I missed popping on Facebook. Even the lure of needing Candy Crush lives was proving strong, but I resisted. Now, if I could apply this willpower to my diet, that would be great!

Going bananas – literally! One of those days where nothing seems to go as you imagine…I’m still feeling under the weather, house was descending into chaos; plus the two little boys had unpeeled all the bananas for fun, not to eat…. so we made a big smoothie! It always helps to ease a potentially grumpy situation as they love making them and it seems to help with afternoon blood sugar slumps.

Went down a treat with the little ones – you can add frozen berries too which we often do.

This fills a large blender so should provide a good few servings. We had loads!! 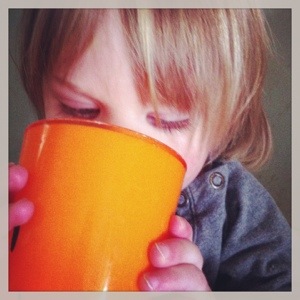 Grab a Glass of Wine and Let Me Tell You About My Day!

I can see the trees
Tulip and Thistle Crochet

With wee shamrocks & fleur-de-lis in the mix

Frivolous Monsters: a journey into the unknown
Bunny Kitchen

And all the yummy things we are making…

A cup of tea and a slice of life

Renovating a house, a garden and other things

...joining our lives through our creations in fabric and yarn

Bento pictures, tutorials, reviews and where to buy in the UK!

Welcome to my world

colouring your world, one stitch at a time

Passionate about cooking and baking and love to share.